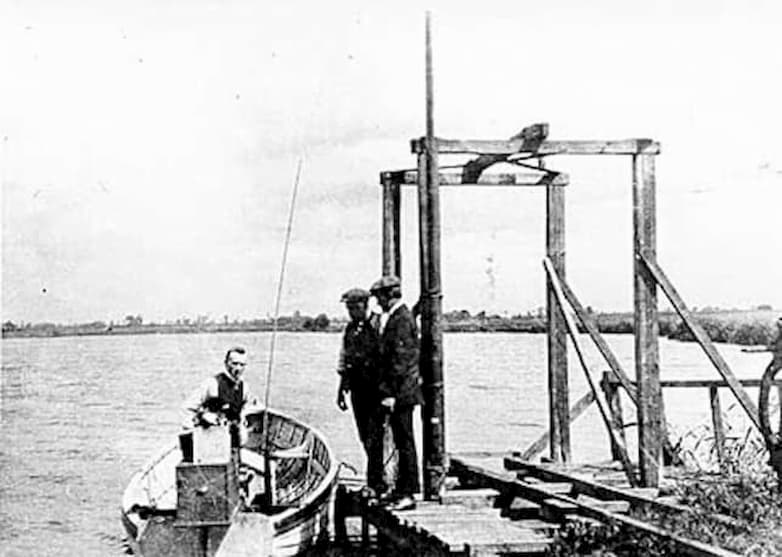 fig 1. Members of the Royal Aeronautical Society with a radio controlled boat on Dagenham Breach in about 1909, London Borough of Barking and Dagenham.

The Dagenham Breach of today is a pocket sized open stretch of water, hemmed in by Ford's diesel engine plant, Barking power station, and the elevated concrete flyover of the A13 trunk road. Now isolated by surrounding development, the open water originally extended right to the Thames. This landscape feature is the result of a catastrophic failure in the river's flood defence which took place during the early years of the eighteenth century.

Failures in the repair of minor faults in the river wall quickly led to huge sections of the earth defences being washed away. Further tidal movements scoured a mass of material from the marsh. These events were the subject of parliamentary discussions in the 1715-16 session, leading to the repair of the flood defence wall, whilst leaving an open mass of water as a striking feature within the surrounding grazing marsh  [1]. Over time the Breach, the name now referring to the water body itself rather than the opening in the river wall, developed into a pleasure ground. Pubs and tea houses were set up to serve the pleasure seekers who came in pursuit of hunting, shooting, boating, and fishing. These uses continued right up until the establishment of the Ford factory in the 1930's. As the city and its industries expanded, these and other spaces of recreation and escape, moved out eastwards into Essex.

The loss of the areas of the pleasure grounds and agricultural land surrounding the Breach has been repeated in various forms across the majority of the estuary landscapes of east London's Thames frontage. Mineral extraction has been a major factor as has extensive landfill, from the mid-nineteenth century onwards, including much of the demolition spoil arising from the Blitz. Industrial development and large-scale public housing have consumed much of the remainder.

Big housing developments over the last century have included some elements of formally established open space. Examples of this are the parks associated with the Beacontree estate, Thamesmead and Slade Green. But apart from the former hunting grounds which form the core of the high woodlands of the South London Green Chain the east London landscape lacked the major estates, such as Richmond Park, which protected and governed development in the west of London. The majority of open spaces have remained undeveloped for essentially pragmatic reasons; the economics of development, the restrictions imposed by flood risk, and the limitations of the transport network. It is these given constraints, rather than any process of conscious planning that has created the current pattern of urban landscape.

One key aspect of the historic landscape is the network of navigable watercourses that have formed a central role in the economy of east London over hundreds of years. The Thames, with its jetties, wharves, and dockyards has served the nation's naval and trading needs. Many of the Thames's tributaries have until recently been navigable, supporting a traffic of lighters and barges to serve such settlements as Dartford, Barking, Rainham, and even, in the case of the River Lea, as far north as Waltham Abbey and its gunpowder mills. Although semi-industrialised, this waterborne traffic was carried through a largely open rural floodplain in which grazing marsh, reedbeds and river woodlands were the main features.

The rise of road transport and a shift in attitude towards defence of the Thames flood plain have combined to transform these fluvial landscapes. Settlements have increasingly turned away from the river, flood embankments have been hardened and raised, and alignments of watercourses have been re-drawn to aid flood defence. These changes to the foreshore and river frontages have had a dramatic effect on public access. The sense of public place and identity founded on the Thames and its tributaries, once so central to these communities, has been all but lost.

The hardening of the river edge has also had a massive impact on the plant and animal habitats of the area. The areas of tidal mudflats and inter-tidal zones have been dramatically reduced together with their populations of invertebrates, so important for wading bird populations. Areas of traditional grazing marsh, which historically have included both salt and sweet marshes, have been destroyed by the combination of industrial settlement and landfill with a subsequent loss of open landscapes and a reduction in the biodiversity of the area. Current use and occupation of the landscape runs against it's natural condition as flood-plain. It is now clear that the use of hard, civil engineering technique has compounded many of the problems associated with flooding.

Some of the most dramatic transformations of the landscape have been associated with the supply of power. An early example would be Beckton Gasworks, founded originally in 1870, with its acres of coal furnaces, gas storage tanks and networks of underground pipes and distribution systems. More recent is the proliferation of major power stations, two at Barking, and one each at Crossness and Littlebrook on the south side of the river. Modern gas fired stations have now taken over from the previous generation of coal fired plants dependant on the river for the supply of raw material, but their impact on the landscape is scarcely less dramatic.

At Beckton the demise of the gas works has left an inheritance of contamination, effectively protecting the landscape from settlement, and safeguarding large areas of semi-wilderness from development. As such this pollution has contributed to the capacity of the land to support wildlife. These artificial landscapes have their own botanical interest. Nearby the pulverised fuel-ash heaps at Barking have supported the colonisation of rare orchids. Here the dumping of ash has replaced the grazing marsh with a new condition of open land, though as yet with no formal public access or productive use. The land is earmarked for the new developments of Barking Riverside including a major new public park founded on this artificial substrate.

The coining of the term 'landscape infrastructure' has its origins in the descriptions of landscape ecology which emerged in the late 1950's [2]. This thinking encouraged an ecological awareness, founded in scientific description, as the primary basis of landscape design and its place within the discipline of city planning. The principle motivation for this, both in Europe and the United States, was a concern to mitigate the effects of an ever expanding urban mass as it colonised the agricultural and natural landscapes that lay at its edge. For the first time, systematic measurement and mapped descriptions of ecological patterns in the landscape were combined with topographic and geological data in to form of complex spatial datasets. These multi-layered maps were then used to identify zones of 'least impact' when planning new transport infrastructure and settlement on green-field and wilderness sites.

In their invention of new forms of graphic description the landscape planners of the 1960's created a new kind of mapped space in which systematic patterns of ecology and the proposed engineered infrastructures of the city, its roads, its power and water supplies, were for the first time measured and pictured in direct relation to each other. Represented in this way, ecology and landscape came to be read in a positive sense as infrastructures in themselves, patterns of open space placed as deliberately as their engineered counterparts with their own rational contribution to the end-state map of the city.

But this view, which depicts the city as an ever expanding urban fabric, with its landscape element as a set of equally controlled and planned spaces, is essentially incomplete as a model of the contemporary city. Recent thinking recognises of the cycles of physical decay and dereliction that commonly take place within the city's fabric [3]. This includes the opportunistic ecologies that can be seen to take hold of the blank corridors bordering the city's infrastructure, degraded fragments of isolated former agricultural land, and examples like Beckton, post-industrial landscapes with their newly colonised artificial geologies. Wild nature is understood not as something that occurs only beyond the city's boundaries but as something that is built into its natural dynamic. Viewed in this way, biodiversity and ecology can be seen to be inextricably bound into the economic and social conditions of individual communities.

As a planning strategy the attitude of 'least impact' and the selective preservation of pre-existing ecologies, is essentially limited and ultimately sterile in its outlook. We now see how new ecologies and landscapes have been created through what previously was considered destructive human action. Whilst it is surely the case that any programme of future investment into east London's green spaces must include elements of preservation and conservation, equally important are the transformations that re-invent and create new landscape conditions. To contribute effectively to these situations we not only have to quantify and measure raw nature, but to develop a new creative and regenerative understanding of ecology and landscape which is rooted in place, memory and local histories of settlement.

This attitude carries with it a new definition of landscape infrastructure based on a thickened perception of the essential base structures of landscape within the city [4]. This infrastructure could be thought of as having at least two new distinct but interrelated components; Working wild, describes those aspects of nature which can be seen to contribute in a significant, measurable and quantifiable way to the functional hardware of the city. This includes, for example, aspects of flood mitigation, microclimate modification, bio-remediation and food production. However it would be wrong to expect to validate every green space in the city on these terms or to establish absolute scales of value based on environmental efficiency, even assuming this were possible.

Slack nature, describes those aspects of the urban landscape which exist outside of, or in spite of, any attempt at formal green space planning. This includes those fragments of raw wilderness which were never planted, designed or managed; the orchid fields of Barking Reach, or the accidental wetlands Dagenham Breach. This is not to deny the necessity of systematic measure, technical knowledge and rational intent in landscape planning, but to recognise the value of the transcendent aspects of nature, the slackness which reaches beyond our capacity to plan and manage; a space for collective awareness, and the vivid presence of cycles of natural regeneration.

1. Captain John Perry, 'An Account of the Stopping of Dagenham Breach', London 1721.

4. Sébastien Marot, 'Sub-Urbanism and the Art of Memory', London: The Architectural Association, 2003.