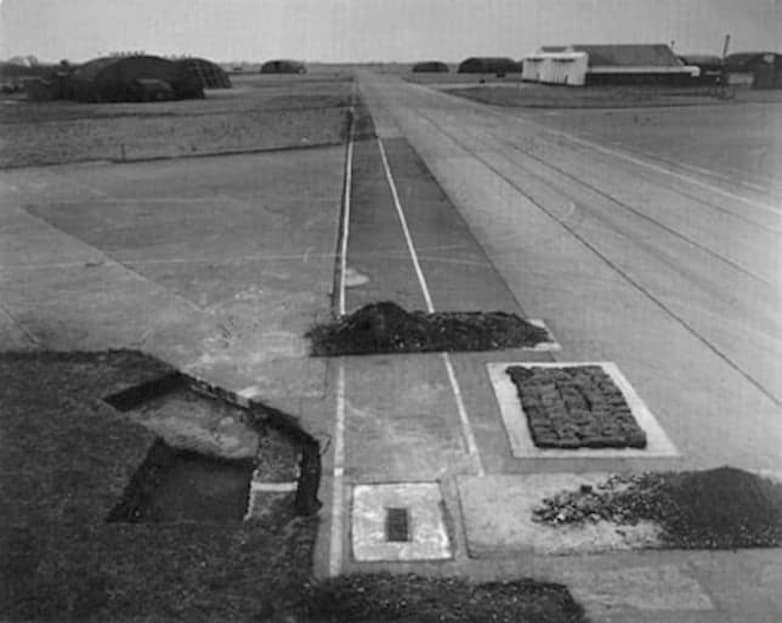 The concept of military space as something which has specific boundaries and territories is one that shifts with the cycles of international and regional politics. Under certain conditions, the comprehensive militarization of a geographic region is temporally figured. Take the transformation of a city or province at a time when its habits of settlement and daily life change materially as a result of perceived threat or actual acts of violence. Or consider Britain in the late 1970's when a collective awareness of the proximity of nuclear annihilation seemed to condition an entire generation's sense of situation in the world.

A work by the artist Cornelia Parker entitled 'Embryo Firearms' (1995) consists of two Colt 45 blanks. Guns in their earliest stage of production, 'proto-guns' which are recognisably gun shaped but have none of the articulation or mechanisms which would allow them to operate as viable weapons. Her work speaks of a kind of muzzled violence, the capacity for base material to become an instrument of violence, and yet to retain a distance from actual violence. Violence is the potential, yet the material is passive. This is precisely the sense of the abandoned military artefact, be it bunker, runway, or empty operations room, spaces that are passive at an immediate level, yet filled with a remote threat of violence.

Jane and Louise Wilson's 'Gamma', a video installation piece dating from 1999 took the former airforce base at Greenham Common as it's subject [1]. Greenham, the location of the largest anti-nuclear peace demonstrations of the 1970s and 1980s, has a history marked by fence cutting and creative vandalism perpetrated by the women campaigners camped on the borders of the base [2]. Part of the work focuses on the underground control rooms of the base. The technology of construction and servicing of these spaces represents a huge investment. With no natural light, these spaces are an empty darkness, wired up for a war represented by coloured lights and wax crayon markings on perspex sheets. This is the nerve centre, the place of command and control. The ultimate war would be fought anonymously from the perceived impregnability of these underground chambers. Which buttons would be pressed when and by whom? This is a war in which instrumentation controls strike and counterstrike, and the physical mass of circuitry intensifies the bunkered distance of agents from the scene of violence. These spaces inscribe an extreme condition of isolation and reliance on technology in the perception and mediation of events in the outside world. It is impossible to comprehend properly the extent or scale of these underground spaces either from within or without. Their complex darkness is the physical manifestation, and now memory, of the cold war.

Startlingly present is the sense of the hidden, in the public exposure of places to which access had once been fiercely controlled. Today the secrecy of such places is no longer considered militarily significant, but the physical evidence of this former status remains in the barbed wire fences, fence posts, sentry boxes, massive concrete enclosures and carefully calculated, extended sequences of doors and access tunnels. The Wilsons' work figures this place in our imaginations. In their amateur dramatics they play out an essential parody of the space. With their handbags, nail varnish and military uniforms they act out the moment of activation of the nuclear trigger. Their play-acting places us, by proxy, in the spaces and repeated moments of imminent annihilation. Their work shocks us into a realisation of the provisional nature of the de-militarised life of peacetime, returning us to a consciousness of the all consuming cold war threat. In this sense their work can be seen in the tradition of vanitas, memento mori, the reminder of the proximity of death, the presence of the skull in the dutch still life.

Another major former airforce base located not far from Greenham, is that at at Upper Heyford in Oxfordshire. The site had been maintained and controlled by the American military from 1952 up until 1992 when the site was returned to the British Ministry of Defence. It's future is now in debate  [3]. Currently managed by a consortium assembled by the property wing of the Ministry of Defence, Defence Lands Estates, the consortium's priority is to maximise the yield of new housing development from the site. Preliminary plans have proposed a new settlement of ten thousand new houses. It seems likely that local planning restrictions will limit the number of new houses to around a thousand, leaving the majority of the site without a clearly defined future use. The vast expanses of runway, taxiways, and assorted hangar and bunker structures are currently used, amongst other things, for storing Rover cars fresh off the production line at Cowley Oxford, for a large mobile exhibitions company, and for the storage of fireworks. However these uses are only permitted by the council under temporary licence, generating enough income to maintain the security of the site during it's transition period. One possible scenario is that the majority of the land will be given over to productive agriculture or forestry, erasing the military organisation of the landscape, and supplanting it with a "traditional" eighteenth century field pattern [4].

At Upper Heyford the presence of the former military structures in the landscape is tacitly assumed to be undesirable. The will to transform the image of this semi-derelict landscape can be understood positively, but the current landscape proposals feel like the equivalent of the cotswold village pastiche of the developer housing. It is the substitution of a false image of landscape, an image which is itself hardly neutral, these field structures having their roots in the eighteenth century territorialisation of landscape implemented by the enclosures act.

An alternative attitude towards the treatment of a former military landscape can be seen in Florian Beigel's competition winning project for the re-development at Lichterfelde-Süd. The site is a former American army base in the south of Berlin and a central aspect of the scheme was that any new development of the site should be structured around existing landscape and infrastructural elements, many of which, given the recent history of the site, carry the memory of the cold war occupation of the site by the American military [5]. The proposal to re-use the concrete military road in it's literal material form as the main access road for the housing settlements in the southern part of the site was considered highly contentious. Titled 'Amerikanisher Strasse' in the competition drawings, opponents of the proposal were quick to re-title the road 'Panzer Strasse'. Its associations were considered too strong. There were practical objections to the retention of the actual fabric of the road, in this case large in-situ plates of concrete: Was it wide enough for a modern traffic specification? How could cables and other services be laid in it? But behind these practical arguments lay a fundamental objection to the political charge and historical associations of the structure.

As discussions on the project develop, so too will the nature of this new-old road space. Perhaps it will continue to exist simply as a line in the landscape restating the former line of the wall some two hundred metres to the south. Perhaps the old concrete will be left in the ground adjacent to a newly built asphalt or concrete highway, with a wild meadow in the strip between. The question is not simply whether to destroy or to preserve, but rather how the imprint of this substantial physical structure is projected into a future condition of the landscape.

What is powerful in the work of both Parker and the Wilson's could be described as a 'quality' of memory. Their work shows the potential for violence embodied in specific places and artefacts. As an architect or landscape architect with a responsibility for the future of former military lands, these issues are of primary importance. How can architectural and landscape strategies articulate the relationship between conflict and its opposite? What qualities of collective, cultural memory can be recovered in these sites of muzzled violence?

2. For general information on the redevelopment of Greenham see Maev Kennedy's article from the 'Guardian' newspaper, Saturday April 8th 2000

all images and text, except where otherwise credited
© Peter Beard 2021